I was baptized and brought up in the Orthodox Christian faith. I was taught it in childhood and throughout my boyhood and youth. But when I abandoned the second course of the university at the age of eighteen I no longer believed any of the things I had been taught.

Judging by certain memories, I never seriously believed them, but had merely relied on what I was taught and on what was professed by the grown-up people around me, and that reliance was very unstable.

I remember that before I was eleven a grammar school pupil, Vladimir Milyutin (long since dead), visited us one Sunday and announced as the latest novelty a discovery made at his school. This discovery was that there is no God and that all we are taught about Him is a mere invention (this was in 1838). I remember how interested my elder brothers were in this information. They called me to their council and we all, I remember, became very animated, and accepted it as something very interesting and quite possible.

I remember also that when my elder brother, Dmitriy, who was then at the university, suddenly, in the passionate way natural to him, devoted himself to religion and began to attend all the Church services, to fast and to lead a pure and moral life, we all – even our elders – unceasingly held him up to ridicule and for some unknown reason called him «Noah». I remember that Musin-Pushkin, the then Curator of Kazan University, when inviting us to dance at his home, ironically persuaded my brother (who was declining the invitation) by the argument that even David danced before the Ark. I sympathized with these jokes made by my elders, and drew from them the conclusion that though it is necessary to learn the catechism and go to church, one must not take such things too seriously. I remember also that I read Voltaire when I was very young, and that his raillery, far from shocking me, amused me very much.

My lapse from faith occurred as is usual among people on our level of education. In most cases, I think, it happens thus: a man lives like everybody else, on the basis of principles not merely having nothing in common with religious doctrine, but generally opposed to it; religious doctrine does not play a part in life, in intercourse with others it is never encountered, and in a man’s own life he never has to reckon with it. Religious doctrine is professed far away from life and independently of it. If it is encountered, it is only as an external phenomenon disconnected from life.

Then as now, it was and is quite impossible to judge by a man’s life and conduct whether he is a believer or not. If there be a difference between a man who publicly professes orthodoxy and one who denies it, the difference is not in favor of the former. Then as now, the public profession and confession of orthodoxy was chiefly met with among people who were dull and cruel and who considered themselves very important. Ability, honesty, reliability, good-nature and moral conduct, were often met with among unbelievers.

The schools teach the catechism and send the pupils to church, and government officials must produce certificates of having received communion. But a man of our circle who has finished his education and is not in the government service may even now (and formerly it was still easier for him to do so) live for ten or twenty years without once remembering that he is living among Christians and is himself reckoned a member of the orthodox Christian Church.

So that, now as formerly, religious doctrine, accepted on trust and supported by external pressure, thaws away gradually under the influence of knowledge and experience of life which conflict with it, and a man very often lives on, imagining that he still holds intact the religious doctrine imparted to him in childhood whereas in fact not a trace of it remains.

S., a clever and truthful man, once told me the story of how he ceased to believe. On a hunting expedition, when he was already twenty-six, he once, at the place where they put up for the night, knelt down in the evening to pray – a habit retained from childhood. His elder brother, who was at the hunt with him, was lying on some hay and watching him. When S. had finished and was settling down for the night, his brother said to him: «So you still do that?»

They said nothing more to one another. But from that day S. ceased to say his prayers or go to church. And now he has not prayed, received communion, or gone to church, for thirty years. And this not because he knows his brother’s convictions and has joined him in them, nor because he has decided anything in his own soul, but simply because the word spoken by his brother was like the push of a finger on a wall that was ready to fall by its own weight. The word only showed that where he thought there was faith, in reality there had long been an empty space, and that therefore the utterance of words and the making of signs of the cross and genuflections while praying were quite senseless actions. Becoming conscious of their senselessness he could not continue them.

So it has been and is, I think, with the great majority of people. I am speaking of people of our educational level who are sincere with themselves, and not of those who make the profession of faith a means of attaining worldly aims. (Such people are the most fundamental infidels, for if faith is for them a means of attaining any worldly aims, then certainly it is not faith.) these people of our education are so placed that the light of knowledge and life has caused an artificial erection to melt away, and they have either already noticed this and swept its place clear, or they have not yet noticed it.

The religious doctrine taught me from childhood disappeared in me as in others, but with this difference, that as from the age of fifteen I began to read philosophical works, my rejection of the doctrine became a conscious one at a very early age. From the time I was sixteen I ceased to say my prayers and ceased to go to church or to fast of my own volition. I did not believe what had been taught me in childhood but I believed in something. What it was I believed in I could not at all have said. I believed in a God, or rather I did not deny God – but I could not have said what sort of God. Neither did I deny Christ and his teaching, but what his teaching consisted in I again could not have said.

Looking back on that time, I now see clearly that my faith – my only real faith – that which apart from my animal instincts gave impulse to my life – was a belief in perfecting myself. But in what this perfecting consisted and what its object was, I could not have said. I tried to perfect myself mentally – I studied everything I could, anything life threw in my way; I tried to perfect my will, I drew up rules I tried to follow; I perfected myself physically, cultivating my strength and agility by all sorts of exercises, and accustoming myself to endurance and patience by all kinds of privations. And all this I considered to be the pursuit of perfection. the beginning of it all was of course moral perfection, but that was soon replaced by perfection in general: by the desire to be better not in my own eyes or those of God but in the eyes of other people. And very soon this effort again changed into a desire to be stronger than others: to be more famous, more important and richer than others.

Some day I will narrate the touching and instructive history of my life during those ten years of my youth. I think very many people have had a like experience. With all my soul I wished to be good, but I was young, passionate and alone, completely alone when I sought goodness. Every time I tried to express my most sincere desire, which was to be morally good, I met with contempt and ridicule, but as soon as I yielded to low passions I was praised and encouraged.

Ambition, love of power, covetousness, lasciviousness, pride, anger, and revenge – were all respected.

Yielding to those passions I became like the grown-up folk and felt that they approved of me. The kind aunt with whom I lived, herself the purest of beings, always told me that there was nothing she so desired for me as that I should have relations with a married woman: ‘Rien ne forme un juene homme, comme une liaison avec une femme comme il faut’. note 1 Another happiness she desired for me was that I should become an aide-de-camp, and if possible aide-de-camp to the Emperor. But the greatest happiness of all would be that I should marry a very rich girl and so become possessed of as many serfs as possible.

I cannot think of those years without horror, loathing and heartache. I killed men in war and challenged men to duels in order to kill them. I lost at cards, consumed the labor of the peasants, sentenced them to punishments, lived loosely, and deceived people. Lying, 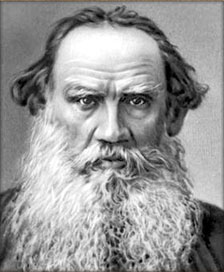